Quanergy’s mission is to design and deliver innovative 3D sensing solutions for automotive and Internet of Things applications to enable increased levels of automation and intelligence to ultimately save lives, energy, time, money, and space. 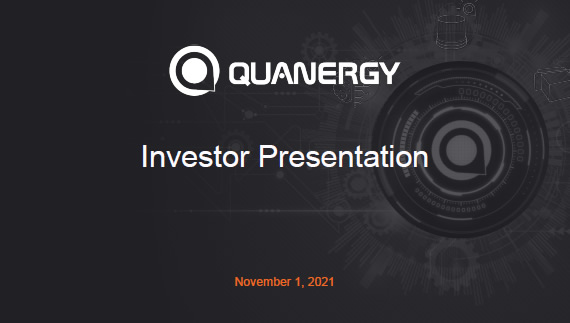 Thank you for Meeting Request with Quanergy

Your message has been successfully sent. We'll get back to you as soon as we can.

Quanergy to Publicly List through a Business Combination with CITIC Capital Acquisition Corp. to democratize Smart LiDAR Solutions for the Automotive and IoT Markets

Kevin J. Kennedy is the CEO of Quanergy Systems, Inc. Kevin was previously the President and Chief Executive Officer of Avaya Inc., a global provider of fully-integrated, digital communications software and services. Kevin joined Avaya in 2009 and led one of the industry’s stronger executive teams to create superior technology and help customers drive communication experiences. Highly skilled at orchestrating innovation and changes in communications and related industries, Kevin has over four decades of experience at companies including Cisco Systems, JDSU, Openwave Systems, and AT&T Bell Labs. Kevin’s specialization is transforming companies through growth and company reinvention, tapping both organic innovation and mergers and acquisitions. During his career, Kevin has been instrumental in closing over 155 acquisitions and has double-digit asset divestitures.

Through 2019, Kevin served as a member of the President’s National Security Telecommunications Advisory Committee, a position he assumed under US President Barack Obama. In 1987, Kevin served as a Congressional Fellow to the US House of Representatives Committee on Science, Space, and Technology. Kevin was honored by the School of Engineering at Rutgers University as their Alumnus of the Year and awarded an Alumni Medal of Excellence in 2006. He previously served on the Board of Regents as Loyola Marymount.

Kevin’s board experience spans both public and private companies across numerous industries including enterprise software, semiconductors, semiconductor test and measurement, intellectual property, cloud infrastructure, real estate investment trust, and cancer research. Kevin has authored multiple patents and has published more than thirty papers on computational methods, data networking, and issues of technology management. Recently, he has been appointed to the board of Maxeon Solar Technologies, where he will serve as Chairman.

He is the author of Devil in the Details, published in 2012, and a co-author of Going the Distance: Why Some Companies Dominate and Others Fail. Kevin holds a BS in Engineering from Lehigh University as well as MS and Ph.D. degrees in engineering from Rutgers University where he served as an adjunct professor from 1982-1984. Kevin also holds a Distinguished Leader Executive Certificate from the University of Michigan Ross.

Tianyue Yu co-founded Quanergy and serves as Chief Development Officer. She has a strong technical foundation with extensive experience in high resolution imaging, 3D laser scanning and microfabrication, high throughput sensing, nanotechnology and advanced electronics materials. She oversees the company’s product design, architecture, engineering and construction to ensure the successful implementation of the product roadmap. Prior to co-founding Quanergy, she had various roles at established technology companies as well as startups from principal scientist to leadership positions building cross-functional teams and leading technology development and commercialization. She started her career at Affymetrix on sensor miniaturization and high resolution imaging. She holds more than 15 patents in sensing, nanotechnology, and system design. Dr. Yu earned a Ph.D from Cornell University with concentration on nanomaterials and nanotechnology and a Bachelor of Science degree in chemical physics from University of Science and Technology of China.

Patrick Archambault is Chief Financial Officer. Archambault currently manages Quanergy’s financial strategy and financial operations as well as forecasting and financial planning activities. Archambault also acts a liaison between Quanergy and members of the financial and investment community. Before joining Quanergy he was vice president in the global investment research division at Goldman Sachs where he spent 17 years. While at Goldman Sachs, Archambault was recognized multiple times in the Wall Street Journal’s “Best on the Street” survey and also received StarMine and Financial Times awards for stock picking and estimate accuracy. He also spent time at Credit Lyonnais in Brazil and at Development Aid from People to People where he co-directed a health education program in Angola. Archambault holds a Master’s degree in International Finance and Business from Columbia University’s School of International and Public Affairs as well as a Bachelor of Arts in political science and philosophy from the University of Western Ontario.

Enzo Signore joined Quanergy as Chief Marketing Officer in 2019. In this role, he is responsible for product management, innovative marketing initiatives and growth strategies for the leading LiDAR company. Enzo brings over 25 years of product management and marketing experience across various industries including integrated photonic systems, artificial intelligence and SaaS. Prior to joining Quanergy, Enzo was the CMO at FixStream, an AI company for IT Operations, where he was responsible for driving the company’s growth through strategic partnerships, channel programs and product and digital marketing. Enzo’s outcome-driven mindset allowed him to grow and establish industry leaders like Cisco, and guide companies from Series A to successful IPO’s. He also worked as the CMO of 8×8, a public SaaS communications company and seven-times Gartner Magic Quadrant leader, where he launched a successful channel strategy program. Earlier in his career, Enzo worked as the global Vice President of Marketing and VP of UC Product Management at Avaya, as well as the Vice President of Marketing at JSDU, the global leader in photonic systems. Enzo is a member of the Board of Advisors for the MS Marketing Program by Santa Clara University Leavey School of Business. Originally from Italy, Enzo currently resides in Saratoga, California.

Sherrard joins Quanergy as CRO and is going to lead the global sales functions as well as the growth of the new product portfolio for the company.
He has earned an MBA from Pepperdine University and a B.S. in Electrical Engineering from the University of California-Irvine. His career of over 25 years has been focused on driving global sales growth for organizations within IoT, sensors, and microelectronics, and industrial markets.

Sherrard most recently served as Executive Vice President and General Manager of IoT Solutions at Sensera Inc., where he increased revenue and market share, built high-yield customer relationships, and expanded the global reach of a brand new business unit of end-to-end IoT solutions. Prior, Brad was the Senior Vice President Sales at U-Blox America a $400M+ fabless manufacturer of positioning and wireless semiconductors and modules for consumer, industrial, automotive, and IoT markets.

Ross Taylor is vice president of software engineering and responsible for the design and implementation of software product development. He oversees a team of engineers in developing Quanergy’s software innovations and features, and fulfilling the specifications of the product roadmap. Taylor has been developing LiDAR and robotics systems and software for more than 15 years. Prior to joining Quanergy, he worked primarily on NASA and DoD LiDAR programs including 3D inspection of the Space Shuttle, planetary rover navigation, and roadside change detection. In addition, he worked on robotics control problems including NASA’s Robonaut. Taylor received his Master of Science degree in mechanical engineering from The University of Texas and his Bachelor of Science degree in mechanical engineering from Louisiana Tech University.

Prior to Quanergy, Uzma was the HR executive at Outforce LLC., a startup incubator company. She simultaneously managed multiple companies from a few founders to growing them to hundreds of employees, many spanning multinational entities. Her vast experience includes conducting due diligence process during acquisitions, audits, setting up and managing global entities understanding employment and labor laws for different countries along with the day to day activities from employee hiring, onboarding to running payrolls. She has an MBA from the University of Peshawar.

Jerry Allison serves as General Counsel and Corporate Secretary, responsible for managing the full range of Quanergy’s legal affairs and advising the board of directors and executive team. Jerry has over 25 years of broad public company experience supporting global technology and manufacturing companies. Jerry’s background includes corporate governance, M&A, corporate compliance, public disclosure and SEC reporting, litigation management, and commercial transactions. Prior to joining Quanergy, Jerry served as Senior Vice President, Assistant General Counsel and Assistant Secretary at Amkor Technology, one of the world’s largest providers of semiconductor assembly and test services. Jerry holds a B.S. in Economics from the University of Arizona, and a J.D. from the University of Pittsburgh School of Law.

Thank you for contacting Quanergy

Your message has been successfully sent. We'll get back to you as soon as possible.